About 97% of the US is classified as “rural” by the US Census Bureau. But according to the FCC’s 2019 Broadband Deployment Report, more than one in four rural Americans don’t have access to internet speeds of at least 25 Mbps (the minimum requirement for broadband internet). That’s 21.3 million people.

Some rural Americans have it better than others. About 29% can reach internet speeds up to 250 Mbps. But 12% of the same demographic can’t even get 10 Mbps internet speeds.

Fastest and slowest rural cities in the US

We combed through data from more than one million internet speed tests and found the rural cities and small towns in the US with the fastest and slowest 😱internet. Now you can know where to go if you’re looking to live the simple life—but with Netflix. 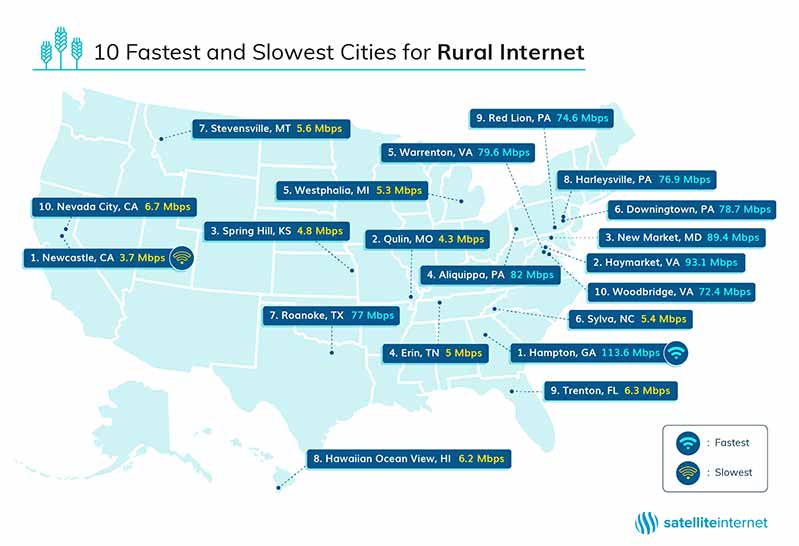 America’s slowest rural cities are all over the map, but there are a few trends. For example, four of the cities (Newcastle, Sylva, Stevensville, and Nevada City) are either very close to or surrounded by National Forests, which could pose infrastructure difficulties for all types of internet.

But the most common reason for slow rural internet is that it’s expensive for internet providers to expand and update infrastructure, so it’s less financially motivating to expand to rural areas with fewer people. The government is trying to incentivize wider broadband rollouts to underserved areas through programs like the Connect America Fund, but there are still millions of people in rural America without access to internet fast enough to keep up with the rest of the world.

East Coast states, on average, have faster internet speeds than anywhere else in the country. Maryland has the fastest statewide average speed with 65 Mbps, and Virginia comes in third with an average of 59.3 Mbps. So it makes sense that these states would be among the fastest for rural internet as well.

Judging by this list, you might think that rural Pennsylvania has it made with fast internet speeds. But according to The Center for Rural Pennsylvania, a huge amount of the state is still struggling with access to broadband internet speeds. That just goes to show that even states with the fastest rural internet still have spotty coverage that leaves a lot of Americans in the dust.

How we got our results

Our data comes from speed tests taken on HighSpeedInternet.com. We examined results from more than one million US speed tests to find the fastest and slowest average rural internet speeds.

We defined a “rural” city as a community with a population of less than 10,000 people that is geographically removed from an urban city. We also filtered out locations with fewer than 50 speed test results to ensure accurate representation of the city’s average speed. In all, we ranked and researched nearly 600 rural cities in the US.

Because the rural cities are ranked by average speed, it is entirely possible to find much faster- or slower-than-average internet speeds in any given area. These numbers do not represent actual internet speeds but are a reflection of the tested internet connections in an area.

By signing up, you agree to our Terms of Use and