Enter your address or zip code to see providers in your area.

Residential satellite internet companies in the US

There are two main choices for satellite internet: Viasat and HughesNet. Starlink (from SpaceX) is currently in a beta test phase and offers satellite internet service to parts of the US, Canada, and the UK. You’ll need a small satellite dish installed on your home, a modem/router from your internet provider, and a monthly data plan. That’s all you need to get internet service from anywhere with a view of the southern sky—whether you own a small town bed and breakfast, a ranch in Texas, or a sprawling farm in the midwest.

For more on the ins and outs of satellite internet, check out How Does Satellite Internet Work?

Satellite internet solves the problem of how to get internet to small towns and rural areas, where fiber and cable infrastructure aren’t in place.

In urban areas, homes and skyscrapers are wired with cable and fiber lines that bring the internet to people living in cities and areas with dense populations. Installing fiber is cheap in an apartment building, where the cost per customer is minimal. But what about people who live beyond the city limits? Running fiber lines out to each home in rural America would be extremely costly. Yet people in the countryside need internet service to stay connected to education, news, telehealth services, remote jobs, friends, and family. 19% of the US population lives in rural areas—which means that over 60 million people may not have access to urban internet options.

Data transfers from your home internet devices to the satellite in space and then to the Network Operations Center back on Earth. All of this happens in about half a second. Thanks to satellite internet, remote workers can work from almost anywhere and enjoy lower real estate prices and a healthier lifestyle away from the city.

Satellite internet vs. other internet services

Because of small data allowances and latency issues, satellite internet can’t quite keep up with other rural internet options, including DSL, cable, and in some cases even 4G LTE home internet. But that doesn’t mean it’s miles behind them in every category.

If you live in a rural area and don’t have access to other types of internet service, we recommend satellite internet. But if you can get service through another type of internet service—like cable, DSL, 4G LTE home internet, or fixed-wireless internet—check out those options first.

DSL and cable usually don’t have data caps and may be faster than satellite internet, and fixed-wireless internet tends to offer better prices for the speeds you get.

*Data is estimated from currently offered plans from popular providers and subject to change. †Availability percentages as reported in FCC Fixed Broadband Deployment.

For a more accurate pricing comparison, let’s look at what a 25 Mbps plan might look like from each provider type. This is a useful speed to compare since it’s a good fit for a household of 2–4 people who need access to Ultra HD streaming.

Satellite internet service is generally not affected by natural disasters, pandemics, or other events. The exception would be if a storm or earthquake knocked over a broadcasting tower.

As a general rule, satellite internet is well equipped to keep people connected to work, school, friends, family, news, and entertainment irregardless of current events. And if hanging out with your family 24/7 is getting a bit much, you can also use your satellite connection to escape for an hour or two. Play a game of Scrabble, learn to build a bench on YouTube, or take an online yoga class.

Getting the most data with your satellite service

All satellite plans limit your data—that’s just how they work. Data is precious, since it travels out to space and back. If you reach your data threshold before the end of the month, your data will be deprioritized. That means your connection will be much slower for the rest of the month.

HughesNet and Viasat offer several unlimited satellite internet plans, but bear in mind that even unlimited plans limit the amount of full speed data you can use each month. Once you reach your data threshold, you can keep the internet for the rest of the month, but your download speeds will slow down to 3 Mbps or less.

So, whichever provider you select, make sure you pick a plan that gives you enough priority data to last through the month and then monitor your data usage so you don’t go over your limit. For a more in-depth comparison, check out our Viasat vs. HughesNet review.

Starlink (from SpaceX) may offer faster internet speeds and less lag than other satellite internet providers because its satellites are in low-Earth orbit (LEO). Satellites that are in LEO are closer to the Earth, and since data doesn’t have to travel as far it can provide an advantage when playing high-speed games online.

Starlink Starlink is a new satellite provider that’s available to customers in parts of the US, Canada, and the UK during the public beta. Because the satellite system is not built out fully, customers may experience service interruptions periodically. Within the next few years, the Starlink satellite system will be fully built out and the service interruptions should not occur anymore.

Starlink isn’t the only company working to leverage a LEO satellite system to deliver fast internet. OneWeb is launching satellites to meet similar goals, although funding problems have slowed the company down. According to current plans, OneWeb will cater to the aviation, maritime, and government sectors rather than to everyday folks living in sparsely populated areas. Project Kuiper (backed by Amazon) is also building a satellite network that will deliver fast internet service, although details are still sketchy on whether residential customers will be able to get internet with Project Kuiper.

Viasat and HughesNet both offer internet plans for businesses that can keep companies connected to their customers and suppliers. Business plans are more expensive than residential plans, although it’s possible to get a Viasat satellite business plan with unlimited data.

Viasat unlimited plans don’t have a hard data cap but they do have a soft cap, which means that your data may be slowed after you reach a set amount. Customers with business satellite internet plans also get quicker repairs and higher security features than residential customers. For more information about business plans, check out our Viasat for Business Review and HughesNet Business Review. 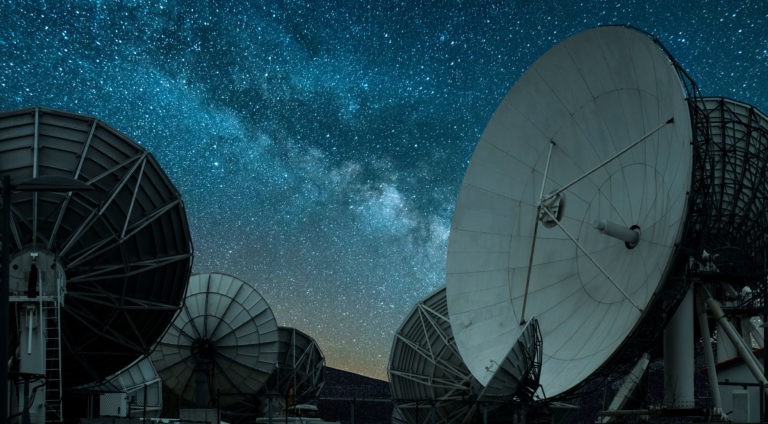 What equipment will I need for satellite internet to work?

How fast is satellite internet?

Download speeds for Viasat satellite internet range from 12 Mbps to 100 Mbps, depending on the plan you choose. HughesNet plans all offer the same download speed of 25 Mbps. But keep in mind those are advertised speeds. The speeds you actually experience may be slower. Starlink speeds (as reported during the public beta test) range from 50 to 150 Mbps, so it’s faster than some plans but slower than others.

When will Starlink satellite internet be available?

Starlink internet is available in parts of the US, Canada, and the UK during the public beta. As new satellites are launched, additional areas will be added. It may take a year or more before Starlink is available globally.

Who has the fastest satellite internet?

In many areas, Viasat offers download speeds up to 100 Mbps. Some beta testers of Starlink report slightly higher speeds for the new LEO service, with download speeds reaching up to 150 Mbps, although speeds vary widely since the Starlink constellation isn’t fully built out yet. Starlink’s advertised speeds are 50 to 150 Mbps.

Is satellite internet as fast as cable internet?

Yes, you can stream with satellite internet, but there are a lot of factors to consider before you do—especially data caps. With satellite internet, you’ll be picking a data plan as well as a speed, and your data plan can make a big difference in your speed. If you use too much data, your speeds will be slowed for the rest of the month, which can impact the ability to stream video.

Should I get satellite internet or fixed-wireless internet?

Enter your address or zip code to see providers in your area.

How do I know if I qualify for subsidized broadband internet service through the FCC Lifeline program?

The Lifeline program offers a $9.25 per month discount on internet service with Viasat, HughesNet, or dozens of other internet providers. If you live on Tribal Lands, you may qualify for a monthly internet discount up to $34.25.

How does satellite TV work?

How can I get high-speed internet in rural areas?

In many rural areas, satellite internet isn’t the only option anymore. Many areas have additional options that offer more data and lower prices. Check out our guide to the Best Internet for Rural Areas to find out about 4G LTE home internet, fixed-wireless, and other options that work away from the city.

Can I get satellite internet for RV?

Still, satellite internet for RV can be the best option for people who work in extremely remote locations or in marine vessels on the open ocean. For more information, check out our guides to internet for RV and best internet for boats.

For most people who are planning to use the internet recreationally while traveling, we recommend using cellular internet in your RV and adding some equipment to make the signal stronger. You can strengthen your mobile phone signal by using a booster made for RVs, using a mobile hotspot, getting a portable 4G LTE home internet plan that isn’t tied to your location, or hotspotting off your phone (with a mobile plan that has a generous hotspot allowance).

Satellite internet is a great option when DSL, cable, or fiber internet aren’t available. In some areas, satellite service offers speeds up to 100 Mbps. Other parts of the country may have slower speeds of around 12 Mbps available in their area. Data caps and latency issues take some getting used to, but satellite internet service can effectively connect people who live away from city services to online school, jobs, news, entertainment, and more.

Satellite internet is available in more remote areas, but DSL internet sometimes has higher data caps. That means that DSL internet customers won’t be as likely to experience throttling. You can check out Satellite vs. DSL to determine which internet type is best for you.

Where can I get WildBlue?

Can you stream with satellite internet?

Yes, most satellite internet plans allow for some video streaming. But, you will need to carefully monitor your data usage because streaming uses a lot of data.

The problem with streaming on satellite internet has more to do with data caps than with speed, since nearly any satellite plan will deliver fast enough speeds for Netflix, Hulu, or other streaming service. But, if you binge watch all weekend and exceed your data cap, your satellite providers will throttle speeds down to 1 to 3 Mbps, which will cause problems with streaming and many other internet activities.

HughesNet and Viasat have options to help you save data when you stream so you don’t use up your data allowance as quickly. We recommend you stream in the lowest quality when possible, since this will save data.

To learn more about SatelliteInternet.com, check out our About Us page. 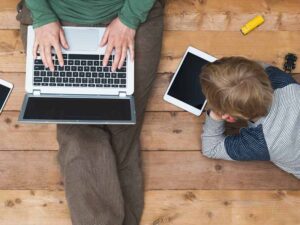 By
Kristin Cooke
Viasat vs. HughesNet: Compare Satellite Internet
Both Viasat and HughesNet are available almost anywhere in the US, but Viasat offers faster... 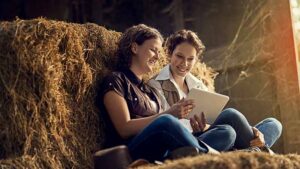 By
Eric Chiu
Viasat Satellite Internet Review
Viasat Internet is the fastest satellite internet option for people who live in the outskirts... 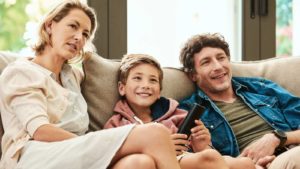 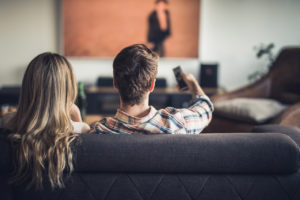