Home » Diversity in Our Solar System

Diversity in Our Solar System 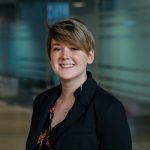 In those five decades, space exploration has become a much more diverse line of work. But how much more?

In celebration of International Women’s Month, we took a look at how gender and racial diversity in space exploration have changed over the years.

The Most and Least Diverse Space Agencies

Sadly, no space agency has an equal number of women to men or people of color to white people. But some are getting closer to equality. 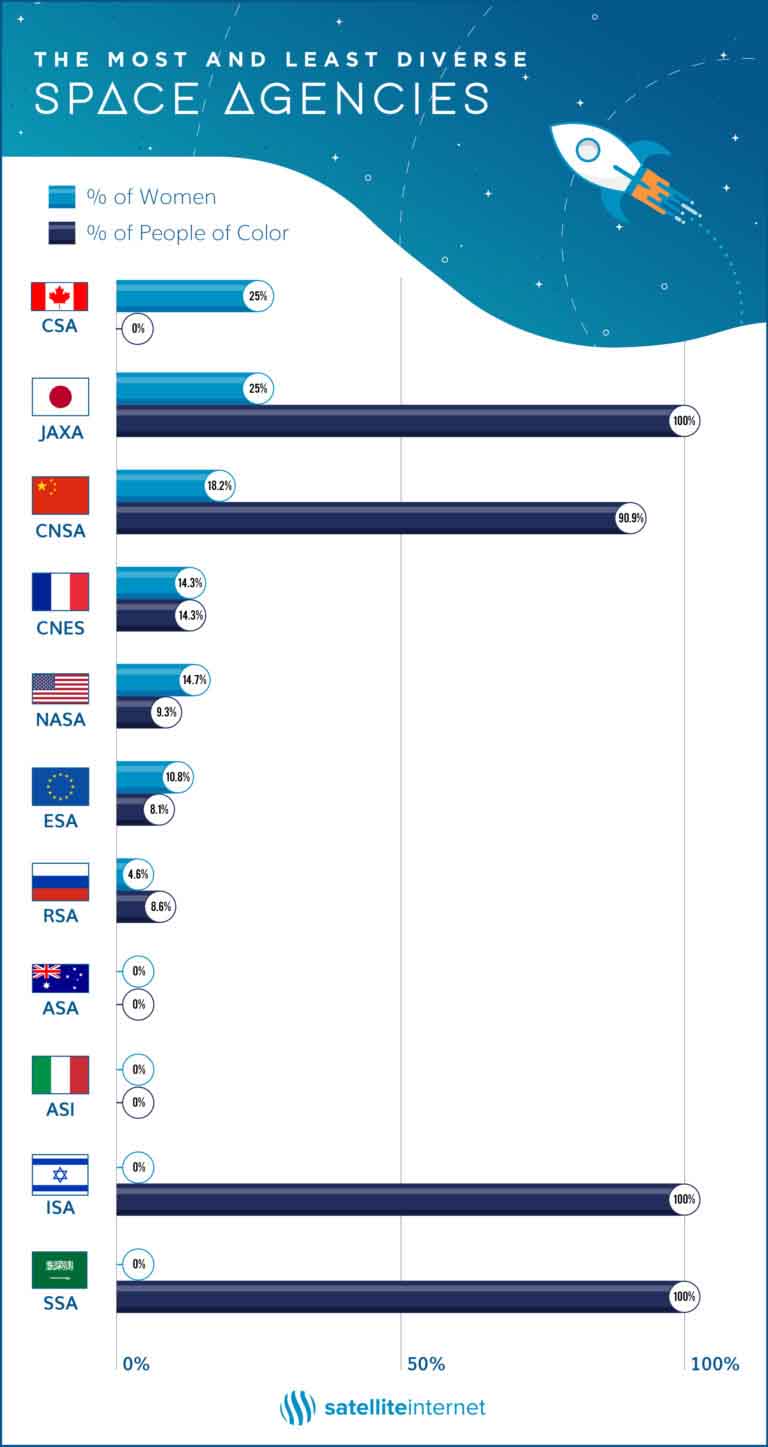 Her first mission was in 1993, where she served as a backup crew member alongside her future husband, Jean-Pierre Haigneré. Can we call that love at first spaceflight? (P.S. Both Claudie and Jean-Pierre have an asteroid, Haigneré, named after them.)

Coincidentally, Liu’s mission launched on June 16, 2012, which was exactly 49 years to the day that the very first female astronaut, Valentina Tereshkova of the Soviet Union, traveled to space. Talk about paying honors.

Two women from the ESA have exited Earth’s atmosphere and launched into space: Samantha Cristoforetti of Italy and Helen Sharman of the UK.

At 199 days, 16 hours in space, Cristoforetti currently holds the record for the longest uninterrupted spaceflight of a European astronaut. She’s also the first Italian woman in space—and the first to brew an espresso miles above our home planet.

Sharman’s expedition to space was part luck, part smarts. She was selected to be the first British astronaut (yes, the first out of the whole country) after responding to a radio advertisement. The selection process noted her PhD in chemistry and selected her over almost 13,000 other applicants. It’s no surprise she’s also a member of the Order of the British Empire.

What does “diverse” mean to you?

Diversity can mean many things to many people. For our analysis of how space-travel diversity has evolved over time, we used the US Office of Management and Budget’s race and ethnicity categories. We then focused on women and people of color (non-white) as two areas of diversity.

Mukai is the first Japanese citizen to reach space twice, and she paved the way for Japan’s second female astronaut, Naoko Yamazaki. Yamazaki traveled aboard the space shuttle Discovery in 2010.

Remember history class? The Soviet Union collapsed on December 26, 1991. But Russia has continued its tradition of space exploration by teaming up with other countries on the International Space Station program.

Perhaps the most famous Soviet astronaut, Valentina Tereshkova was the very first female in space. She piloted the Vostok 6 spacecraft in 1963.

What about LGBTQ+ diversity in space?

Sadly, there’s not much information on whether any space agencies include LGBTQ+ astronauts—possibly because the publicity could damage their careers. As of now, NASA’s own Sally Ride is the first and only known LGBTQ+ astronaut. She kept this a secret until her death in 2012.

Over the decades, we’ve seen diversity in space exploration really take off. 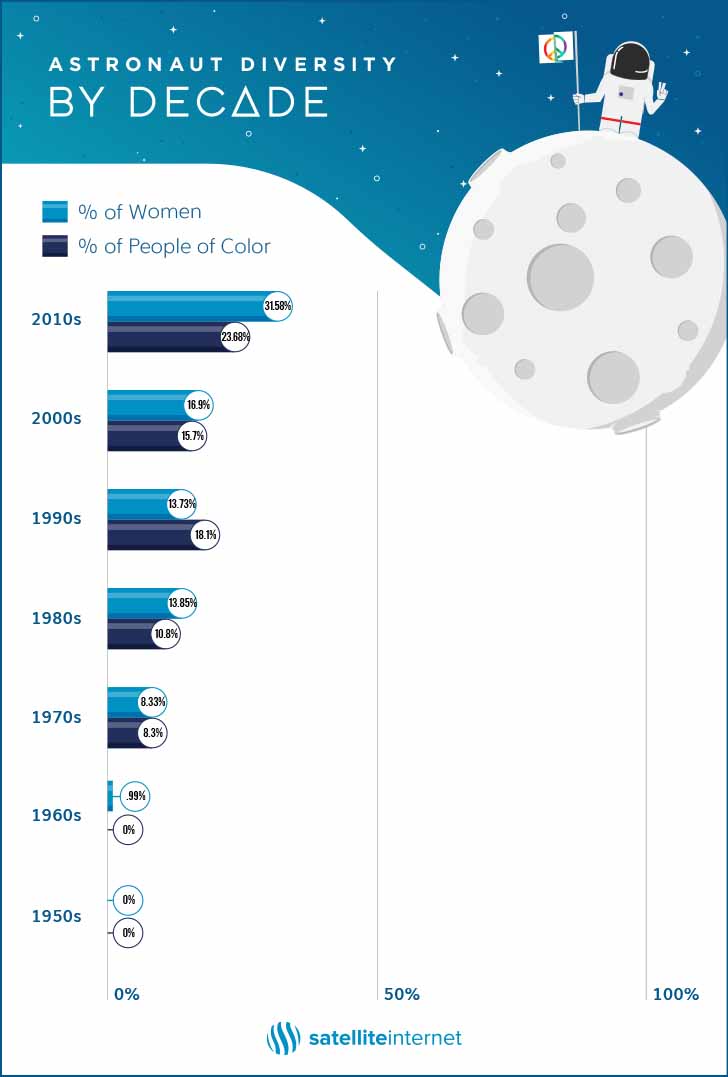 There are more people of color in space than ever before.

As we see more privately owned space agencies pop up, we hope the number of women and people of color in space to keep rising. And don’t forget about space tourism agencies like Virgin Galactic, which sent its first female flyer, Beth Moses, into space on February 22, 2019. 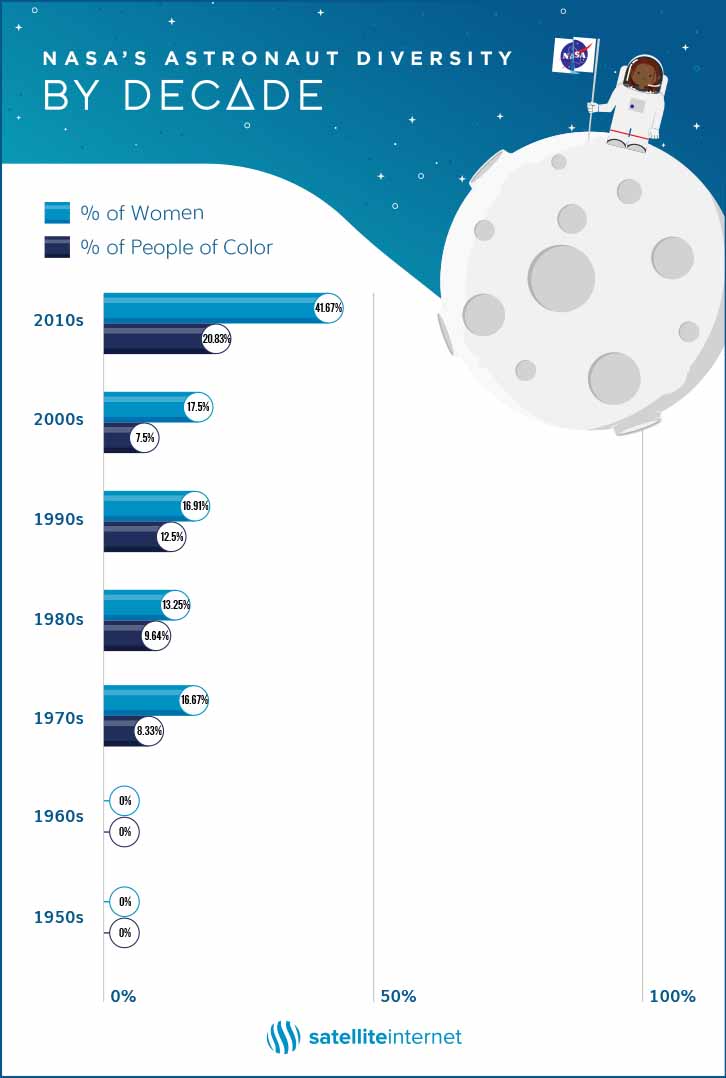 NASA is also planning the first all-female spacewalk on March 29, 2019. If all goes as planned, Anne McClain and Christina Koch will take a “walk” outside the International Space Station to replace batteries on the solar arrays.

And just recently NASA Administrator Jim Bridenstine stated the first person on Mars would likely be a woman. How’s that for a first?

We're pretty bummed to hear NASA canceled its all-women spacewalk. The spacewalk was scheduled for Friday, March 29, but both Ann McClain and Christina Koch need medium-size spacesuits and only one is available at the International Space Station. Is anyone else having flashbacks to digging through the racks at the mall to find your size?

The race to make space more diverse isn’t over.

While great leaps are being made to make space exploration a diverse occupation that represents all Earth’s people, we still have a ways to go. 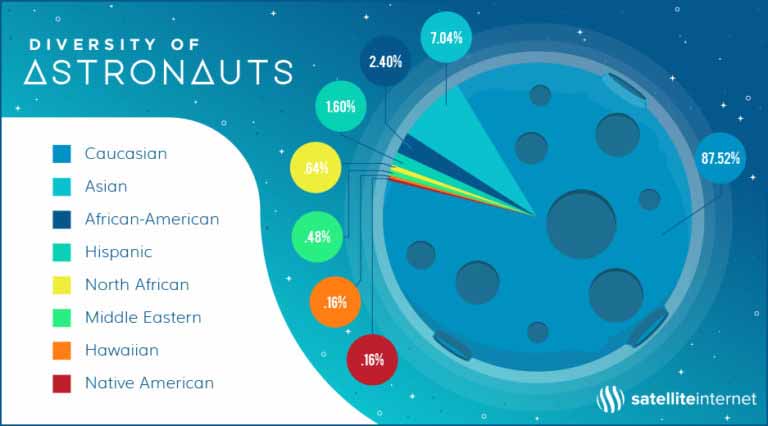 At 88% of total space travelers white astronauts make up the majority of people in space from all space agencies over all decades. Asians account for 7% of all astronauts, and African-Americans and Hispanics account for 2% each.

But what about North Africans, Hawaiians, Native Americans, and people of Middle Eastern descent? Each one accounts for less than 1% of space travelers.

How diverse is NASA?

If we look at NASA specifically, its diversity in space still has light years to go in terms of equality. 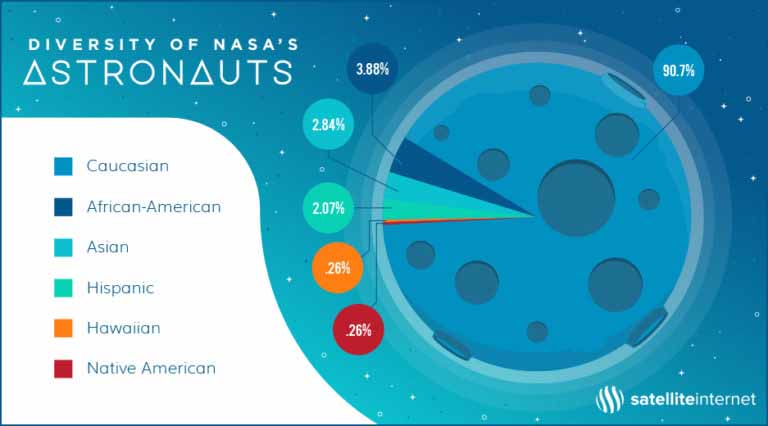 Here’s hoping those numbers continue to even out across all space agencies and we see more astronauts from different races, ethnicities, genders, and sexual orientations headed to the stars in the future.

How’d we come up with these intergalactic diversity trends? First, we scoured multiple lists of the more than 600 astronauts selected for space missions over the past seven decades.

Then we identified where, when, and how space agencies across the globe began diversifying space travel by comparing data on race, ethnicity, and gender using the US Office of Management and Budget’s race and ethnicity categories.

After that, we brought all the data together to identify which agencies have been the most diverse, how diversity has changed over the decades, and where diversity in space looks to be headed in the future.

Written by
Catherine McNally
Catherine has a degree in journalism and an MBA, and has spent the last 10+ years writing everything from Okinawa travel columns to internet guides and reviews. She's a lead writer on internet and technology for Reviews.org and believes the internet is a necessity, not a luxury, that everyone should have access to. You can also find her on Twitter: @CMReviewsIt.
Read More