Did Neil Armstrong really take his “one small step” on the moon 50 years ago? Or was it on a Hollywood set? We asked 500 Americans their opinions on the Apollo 11 moon landing and found that 10% of them think the whole thing was fake. No, Buzz Aldrin did not punch them all in the face.

The good news is that most people believe we made it to the moon in 1969, so don’t give up on humanity just yet. But 10% is higher than the 6% who said it was fake in the Gallup survey about the moon landing in 1999. This suggests that there are more moon landing deniers now than there were 20 years ago.

Survey results showed that more moon landing conspiracists pop up with every new generation. Millennials and Gen Zers between the ages of 18 and 34 are six times more likely to believe that NASA pulled the biggest con of the twentieth century than people who were actually around for the first moon landing are. Younger participants were also more likely to identify as flat-Earthers,  but that’s more of a global problem.

It’s possible that younger people are more likely to not believe in the moon landing because they didn’t watch the actual event. If that’s the case, hopefully NASA’s upcoming moon missions will help convince them. That said, the majority of all age groups still agree that the moon landing was real and the Earth is round. Thank goodness. 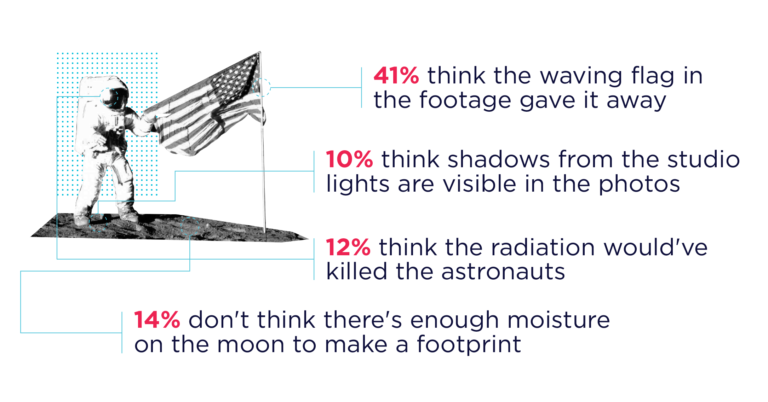 That’s no moon…it’s a sound stage. Moon landing deniers have been around since there was a moon landing to deny. The most compelling “proof” of the hoax seems to be the American flag, which looks like it’s waving in both still images and video from the Apollo 11 moonwalk—even though there’s no wind on the moon. “Oh say does that star-spangled banner yet wave…?”

All the “evidence” the moon landing was faked has been debunked countless times. Even so, concerns about the flag, strange lighting and shadows, radiation, suspiciously clear footprints, and the lack of visible stars in photographs continue to sow seeds of doubt.

If the US can fake putting a man on the moon, what else can they do?

Moon landing deniers are putting a lot of faith in the US government and its ability to keep a secret for 50 years. Surely someone would have spilled the beans by now. But say the moon landing was staged—what else might our moon landing conspiracy theorists think NASA is hiding? 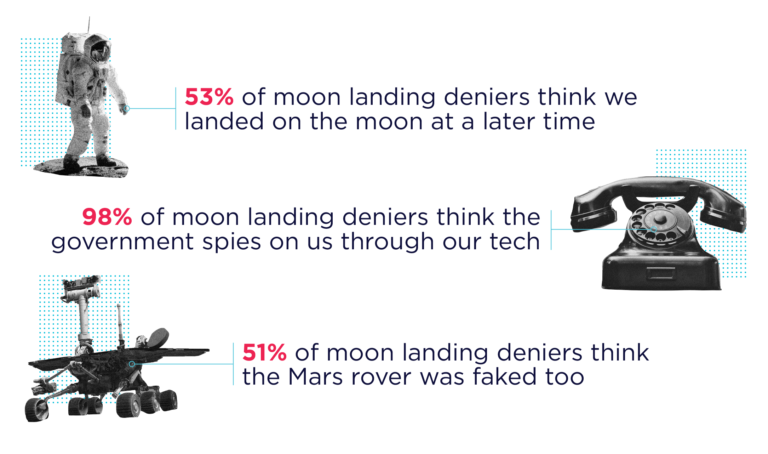 Surprisingly, more than half of the surveyed moon landing deniers do believe that we landed on the moon, just not when we said we did. About half believe that NASA made up the Mars rover too. Do these people think NASA exists only to create conspiracies?

Less surprising is that almost all the participants who believe the moon landing was fake also believe the government is spying on us through our phones and computers. Considering the whole National Security Agency (NSA) scandal a few years ago, we’ll just leave this one alone.

A lot of people think we’ve had extraterrestrial visitors. (If we have, hopefully they didn’t watch Starship Troopers or any of those other movies where humans kill a bunch of aliens for no reason because that’s just embarrassing.) Survey results suggest that moon landing deniers are much more likely to believe that aliens have visited Earth than people who (correctly) believe we actually landed on the moon.

Yes, it seems fitting that moon landing deniers believe in weird stuff, but this one seems extra odd. You can believe that aliens trekked across space to Earth, but you can’t believe humanity put a man on the moon?

Fifty years out from the historic event, there are more moon landing deniers than ever. But we agree with the 90% of Americans who recognize the moon landing for what it was: an achievement of human ingenuity. Maybe moon landing deniers will change their minds when the first woman lands on the moon in 2024. Or maybe it’ll just give the conspiracy theorists more “evidence” to work with.

Written by
Rebecca Lee Armstrong
Rebecca is a natural techie and the friend you turn to when your Wi-Fi randomly stops working. Since graduating from the University of Evansville with a degree in creative writing, Rebecca has leveraged her tech savvy to write hundreds of data-driven tech product and service reviews. In addition to HighSpeedInternet.com, her work has been featured on Top Ten Reviews, MacSources, Windows Central, Android Central, Best Company, TechnoFAQ and iMore.
Read More