Are you tired of high rent and itching to explore? #VanLife has been an American trend for a few years now—it’s got nearly 13 million posts on Instagram—and with more companies embracing remote work, there’s never been a better time to hit the road.

Van life is also a great way to adventure at a fraction of the price. Plus, you can trick out your van with solar energy panels, custom fitting, and design patterns to match your taste. And being on four wheels means you can stop where there’s cheap gas and inexpensive groceries.

Who are van lifers?

Van lifers are in all stages of life, including twenty-somethings, families with small kids, mid-lifers, and retirees. But, in spite of the SNL sketches you’ve seen about “living in a van down by the river,” hip millennials are the leaders of the van life movement.

Many van lifers are self-employed or work remote jobs. Some van lifers work seasonal jobs instead, making enough during busy seasons to live off for the rest of the year. So if you think you need to be old or rich to enjoy life on the road, think again. What you do need, though, is a good place to start your van life adventure. We can help with that.

Let’s say we’ve convinced you to try out the van life and you’re ready to embark on the best cross-country adventure ever. But where should you go? We put together a list of the best states for #VanLife so you don’t get stuck somewhere with the most expensive gas and groceries in the country (Hawaii).

So what makes a state great for van lifers? We wanted to find places that have cheap gas, good outdoor space, and inexpensive groceries. Plus, you need Wi-Fi hotspots to get online and work remotely.

Eight southern states came out in the top ten, and, surprisingly, no states from the west or northeast rank as the best for van life. Most of the best states for van life actually are situated in the southeast of the US.

Michigan and Missouri are the only two states not from the south to make it into our top ten.

What makes a van lifer’s paradise?

Texas. The second largest state in the US by population and area. Home of high-tech companies, agriculture, oil, and the traditional Texas cowboy.

But none of those have any bearing on whether the state is good for van lifers. What we love are Texas’s gas prices near $3.00 a gallon, inexpensive groceries, over 25,000 Wi-Fi hotspots, and gorgeous weather with the average temp hovering around 65ºF, making the state a van lifer’s paradise.

Now, Texas does have a larger-than average-population density (approximately 110 people per square mile, which is 22% higher than the US average), but then again, everything is bigger in Texas.

If you’re looking for a good place to start your #VanLife journey, you can’t go wrong with Texas.

The top 10 states for van life

What do the top ten states have in common? For starters, warm weather, over 8,000 Wi-Fi hotspots, cheap gas, and inexpensive groceries. But let’s break down a few highlights: Texas offers over 25,000 hotspots along with cheap groceries and gas under $3.20 per gallon. Michigan has the cheapest groceries. Florida has temperatures averaging 71ºF yearly and over 175 state and national parks.

Wherever you choose to travel in our top ten, you can be confident knowing that you’ll get numerous Wi-Fi hotspots, cheap gas, affordable groceries, some of the best weather in the US, and a ton of great state and national parks to visit.

The bottom 10 states for van life

On the other hand, the bottom 10 states for van life have some of the most expensive gas in the country (Hawaii), the highest grocery costs (Alaska and Hawaii), a low number of hotspots (Vermont and Maine), and some of the coldest weather (Alaska and Maine). They’re still great places to visit, but you may not want to park your van there for the long term.

Best US regions for van life 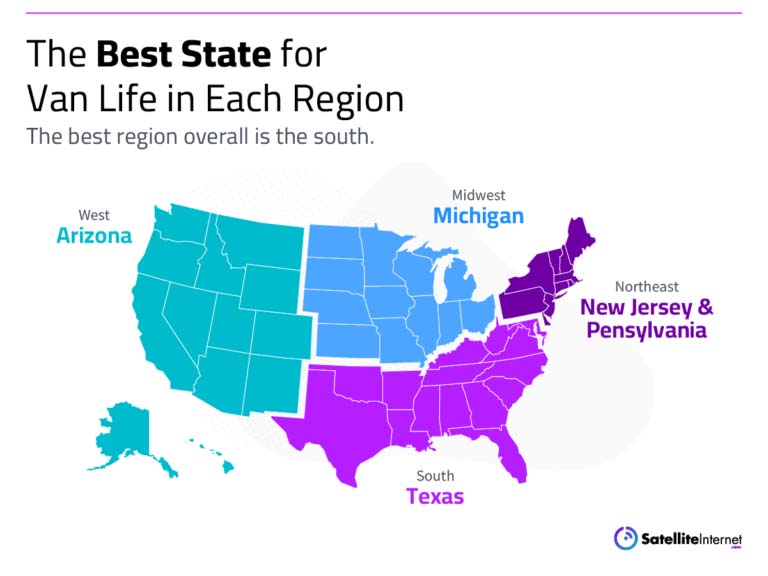 Maybe instead of visiting just one state you want to take your van across a whole region. Honestly, that’s what makes van life so great—you can explore broad areas super easily. So, what’s the best region for #VanLife? The US south.

You may have already guessed that already, since eight southern states rank in the top ten. The south has the cheapest gas in the US, the best weather, and the lowest outdoor consumer spending.

But if you’re looking to road trip across the whole country, what are the states you just can’t miss? Well, we divided them up by region.

In the west, Arizona has great weather and over 28 million acres of federally owned land. And we already know about Texas's hotspots, cheap groceries, and great gas prices in the south.

Surprisingly, New York isn’t our top northeast choice—that distinction goes to New Jersey and Pennsylvania, which spend the most money per capita on outdoor recreation. In the midwest, Michigan takes the cake with the lowest grocery cost in the nation.

Now you’re ready to start your life on the road.

Find all your internet provider options no matter where you are with one search.

So you’ve found which states to go to, and you’re all ready to set off on your new van life. Not so fast. We’re not going to let you head out before you know the basics of doing it well—especially about staying online for work and fun when in the van.

First of all, for internet on the go, you’ll probably want satellite internet so you can get access anywhere. But is it right for you? Sure, there are some pros and cons, but it's great for rural areas where you can't hit those Wi-Fi hotspots and there are a growing number of providers.

Now what about specific providers for #VanLife? Don’t worry, we’ve got you covered. We found the best options so you can stay connected on the road. From hotspots to SpaceX's Starlink, there are options for everyone.

For example, we love HughesNet for rural internet and satellite internet, so if you're planning to go off-grid for a while, this is how you can stay connected. Plus HughesNet offers RV or portable satellite internet, but it’s an add-on cost that can be expensive when you’re trying to save money on the road.

And when you’re ready, we’ll walk you through setting up Wi-Fi on satellite internet. It may seem complicated, but we can get you up and running in no time.

We ranked each state on seven different factors—including gas price, cost of food, federal land, hotspots, outdoor consumer spending, the number of state and national parks, and the temperature in each location—to find which places are the best for digital nomads. Each state received a rank for each category, and then their ranking for each category was added up to determine the best and worst states (the lower the total ranking number, the better).

Written by
Alex Kerai
Alex began writing for student newspapers and has managed to turn that into a career. During the COVID-19 pandemic, he wrote about small businesses for Biz2Credit and Business.org. Before that, he spent time in communications for higher education institutions, created marketing materials for nonprofits, and worked for entertainment companies in Los Angeles. Today, he reports on emerging consumer trends and his work can be seen on Business.org, Reviews.org, WhistleOut.com, and CableTV.com. When he's not writing, Alex watches too much TV, plays guitar, reads and writes fiction, and goes on nature walks.
Read More