Satellite internet is wireless internet beamed down from satellites orbiting the Earth. It’s a lot different from land-based internet services like cable or DSL, which transmit data through wires. Since it’s the only internet service that’s available nationwide, satellite internet is often the only way to get online for many rural homes and businesses, although it does still come with a few disadvantages (more on that later).

Is satellite internet the only option in rural areas?

How does satellite internet work?

Satellite internet works by using radio waves to communicate with satellites orbiting the Earth. Data is sent and retrieved through a communication network that starts with your device and travels through your modem and satellite dish, out to a satellite in space, then back to Earth to ground stations known as network operations centers (NOC). And then, data travels back through this network—out to space and then back to your satellite dish on Earth—to deliver data on your device.

An internet-ready device is any device that can access the internet through the proper service. This includes your computer, tablet, smartphone, smart TV, gaming consoles, and any other internet-enabled equipment.

When you use the internet on one of these devices, it sends and receives data through your modem/router.

Translates data: A modem translates data so it can move between your internet-ready device and the satellite dish. You can connect some devices, like a computer, smart TV, or gaming console, directly to your modem using an ethernet cable.

Wi-Fi capabilities: However, those cables can get a bit messy, and you’ll still need Wi-Fi capabilities for devices like tablets and smartphones. That’s where a router comes in. It connects to the modem to give it Wi-Fi capabilities. A router broadcasts an internet signal wirelessly, so you can pick it up on your phone, laptop, or other device. HughesNet and Viasat satellite internet modems come with a router built in, although you can upgrade your network by using a fancier model if you’d like.

You can lease your modem from your satellite provider or you can buy it from them upfront, but you have to use the modem configured by your provider. Modems you see from BestBuy or Amazon don’t work with satellite internet. You can use your own router though. You can find a new router with our best routers and modems for satellite internet review.

The next step in the relay is your home satellite dish. This dish must be precisely positioned to beam signals to the provider’s satellite in orbit and receive information back. A certified technician from your provider will take care of placement for you.

The tricky positioning of a satellite dish can make satellite internet difficult for traveling RVs. Additionally, your account is set up to be under a specific spot beam from the satellite in space, so how far you would be able to travel and still get internet would be somewhat limited.

Roughly 22,000 miles above the surface of the Earth, satellites used in traditional satellite internet service (like what you get from Viasat and HughesNet) hover over the equator. They rotate with the planet, so the signal relay stays consistent. This is called a geostationary orbit. This allows for two-way data communication between your dish and the provider hub, or NOC.

Both HughesNet and Viasat have their own satellite with spot beam technology. Spot beams cover specific areas of the US, rather than using one beam to cover the entire country. 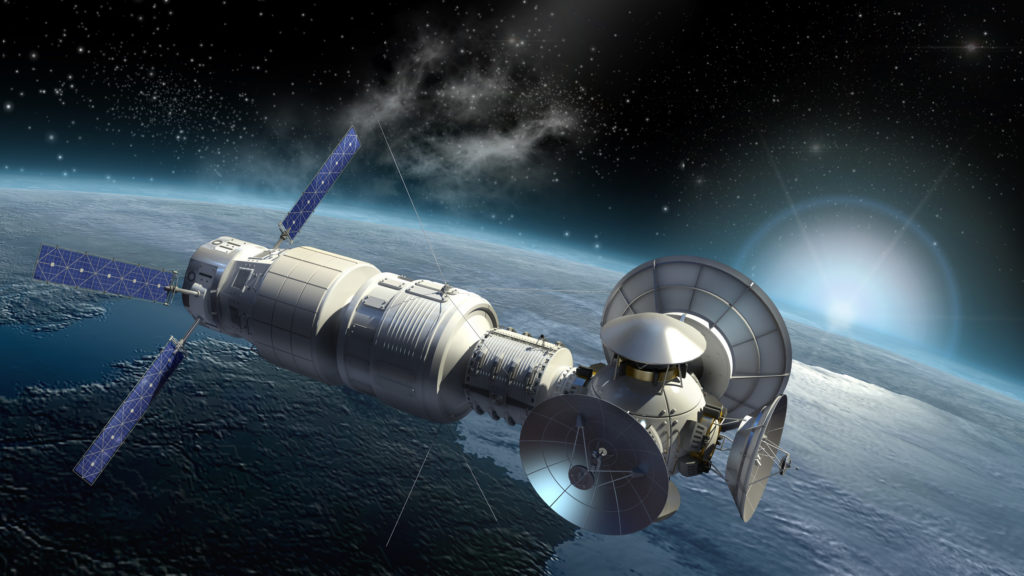 Whenever you request information from the internet, whether you’re clicking on a link, streaming a show, or opening Facebook, the data from that request is uploaded through the above relay. The satellite then beams that request to the NOC.

Using a much larger satellite dish than the one you have at home, the NOC receives your request. The NOC then taps into the internet backbone, gathers the information you requested, and sends it back through the relay to you.

All of this process, including beaming information 22,000 miles into space and back twice, happens in fractions of a second.

Because the information has to travel so far, you may notice more latency (also called lag) than you might with DSL or cable internet, but advances in technology have made the satellite internet today much faster than it used to be.

Which satellite internet provider should I choose?

Viasat (formerly Exede) and HughesNet are the two satellite internet providers in operation today. Viasat has faster speeds and higher data allowances, while HughesNet offers more affordable packages. Starlink is is available in select locations during the beta, although service may have interruptions until the Starlink’s constellation is more fully built out.

Viasat offers 10 different plans—but we recommend you skip over the limited plans (called “Liberty”) and go for an unlimited plan. You’ll thank us when you don’t have to buy more data mid-month.

All HughesNet plans offer the same speeds—25 Mbps download and 3 Mbps upload. You will choose the amount of data you need each month.

To learn more about the providers and decide which one is best for you, check out our article “Viasat vs. Hughesnet.”

Where is satellite internet available?

Can you stream on satellite internet?

Yes, you can stream on most satellite internet plans, but you need to watch your data usage carefully. Video streaming uses a lot of data, and data is precious with satellite internet plans. Satellite internet providers limit the amount of full-speed data you get every month, depending on how much you’re paying for. So, if you stream too much and hit your data cap, your speeds will drop to throttled speeds, which can be as low as 1.5–3 Mbps for the rest of the month. Ouch! That will make everything from streaming to participating in work Zoom meetings a lot harder.

How fast is satellite internet?

Satellite internet speeds range from 12–100 Mbps, which is enough speed for common online activities like emailing, browsing, and online schooling. You can even stream video to a limited extent (just don’t go overboard with streaming because you’ll have throttled speeds for the rest of the month if you use all your priority data).

Is satellite internet the same as Wi-Fi?

Can a satellite internet provider run out of bandwidth in a particular location?

Yes, a satellite provider can run out of bandwidth in a certain geographical area. This is because all data (ingoing and outgoing) must pass through the satellite serving a particular area. The satellite can process only a certain amount of data at the same time. If additional requests come in, the satellite won’t be able to process everything at once. In practical terms, this means that if too many customers try to add service in a given area, speeds can be slowed to the point that they are no longer functional.

Demand for Viasat has exceeded available bandwidth in some parts of the US, so Viasat does not accept new subscribers in those areas. Once new satellite systems are in place, the available bandwidth will increase and new customers can again start service. For now, the only way to find out if you can get service with Viasat is to contact Viasat’s customer service.