Best Internet Options for Truckers: Staying Connected on the Road

When you’re OTR five days or more each week, reliable Wi-Fi is essential. For professional truckers, having good internet access can make the difference between taking unpaid backhauls across the country (ouch!) and earning profit every mile (yes!).

Truckers and delivery drivers of all types rely on Wi-Fi. Long-haul truckers and local delivery drivers use Wi-Fi to pick up jobs, file delivery reports, get navigation and road condition updates, and to stay in touch with friends and fellow truckers along the way. CB radios are still used by truckers in some parts of the country, but they’re used mostly for camaraderie and local information.

A few trucking companies provide a satellite internet connection in their rigs, but it’s slower than Wi-Fi in most areas and expensive to get set up. Others provide mobile phones, hotspots, or other internet options for their drivers, but most truckers are on their own finding the best solutions to stay connected to the internet while on the road and during 18-hour layovers.

If that’s the case for you, keep reading to get our insight into what plan is the best option for you.

The best portable internet options with plenty of data are mobile hotspots or 4G LTE internet plan. Mobile phone plans can also keep truckers connected, although a mobile phone plan may restrict data if you’re using it as a hotspot to connect a laptop.

Mobile hotspot devices deliver the best internet experience for truck drivers because you can add a mobile hotspot data plan to your current cell phone plan for a relatively low fee (Verizon charges $20 per month for customers who already have at least one phone line through Verizon).

Mobile hotspot devices aren’t infallible—you’ll be driving in areas without a phone signal sometimes. And sometimes you won’t have a signal at remote truck stops or rest areas in mountain passes. But mobile data is still more reliable than any other kind of portable internet you can get. 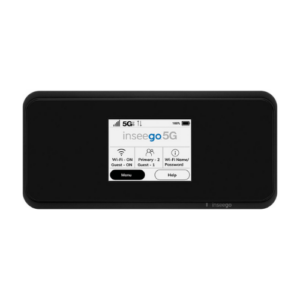 The Verizon MiFi M2100 mobile hotspot device is good for truckers and RVers thanks to its good coverage area and long battery life (it’s good for up to 24 hours of usage per charge). If you already have a Verizon Unlimited phone plan, you can add an extra line for this hotspot for just $20 per month.

You can use your Verizon MiFi M2100 mobile hotspot to connect laptops, gaming consoles, and other devices to the internet while you’re away from home. Just know that your internet connection will work only in Verizon service areas. 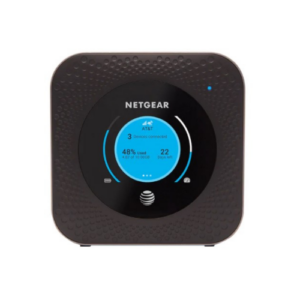 If you have cell service with AT&T, it makes sense to get a mobile hotspot through AT&T (since carriers offer discounts for second lines). AT&T has a strong nationwide network, like Verizon, and will give you maximum connectivity while on the road. You’ll still drive through dead zones where there isn’t service, but it won’t be as many dead zones as you’d drive through if you were on T-Mobile or Sprint.

The NETGEAR Nighthawk MR1100 4G LTE mobile hotspot router has good battery life (up to 24 hours, like the Verizon MiFi). It’s a good way to connect multiple devices to the internet while you’re on the road or at layovers. 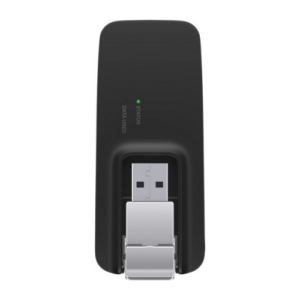 If you’ll be using your mobile hotspot device exclusively to connect a laptop to the internet, the Verizon Global Modem USB730L is a handy plug-and-play portable modem. It doesn’t connect as many devices as the other options we mention, but it’s well suited to single laptop use. As a bonus, it works in over 200 countries, so if you’re driving loads to Canada or Mexico, you can use it internationally (although varying data rates apply).

Using your mobile phone as a hotspot

If you just need to occasionally get Wi-Fi on a laptop, you can skip the mobile hotspot and use the personal hotspot feature on your mobile phone instead. You’ll just need to make sure you have hotspot data as part of your cell phone plan.

To create a hotspot, go to Settings > Personal Hotspot and turn it to “on.” You’ll then be able to pick up the internet signal from your phone on another device, such as a laptop. On your laptop, click on the network icon and scroll down to your phone connection. Select your phone’s name and type in the password you’ve previously set on your phone. This will share your phone internet with your laptop.

Data effective 10/5/20. Offers and availability may vary by location and are subject to change.

If you have serious data needs while on the road (like a gamer in the passenger seat), 4G LTE internet is something to look into. Connecting with 4G LTE internet will give you much more data than any other type of internet you can get on the road. Most 4G LTE home internet plans give you 400 GB or more per month—which is much more than you’ll get with a typical mobile hotspot.

There are a few limitations to 4G LTE internet though. It works only in areas with mobile phone service (of course). You’ll also need to keep the router plugged in while it’s in use (there isn’t a battery option), which should be fairly simple in a sleeper truck.

To get 4G LTE internet service, you’ll have to pay for the router/modem up front and then pay for monthly service. The advantage to this type of service is that you can take it with you on the road and also set it up at home.

A cell phone signal booster can extend your cell phone’s signal beyond the normal service area. This means less time in no-signal areas where you’re cut off from communication and the information you need to get your job done. If your regular routes are taking you through no-signal areas or you’re a long-haul trucker taking long trips, we recommend getting a signal booster for safety and reliability.

Truckers will get the best internet experience with cellular data—mobile networks are made to be mobile, after all! If you need more data than you can get from your phone plan alone, get a mobile hotspot from Verizon or AT&T. And if you’re part of a trucker team and you really eat through a lot of data, a 4G LTE internet plan will give you loads of data at an affordable price.

Steer clear of Sprint, T-Mobile, Boost, US Cellular, and any other mobile provider other than Verizon or AT&T because they just don’t deliver adequate coverage for truckers. You’ll want Verizon or AT&T for the best coverage outside metro areas.

The best way to get internet in a semi is with a mobile phone from AT&T or Verizon. If you need more data than a single phone line offers, get a mobile hotspot to keep laptops and other devices connected on the road.

Most truck stops do have internet, but it's usually slower and less reliable than mobile phone data. We recommend truck stop Wi-Fi only for recreational use.

At some truck stops, you can pay an annual fee to access better quality internet, but it can still be unreliable and subject to slowing. If you're a truck driver depending on internet to pick up jobs, file paperwork, and get the latest road conditions, you need your own connection that you can access on the road, like a good AT&T or Verizon mobile plan.

Most truckers get internet access on the road with a mobile phone plan from Verizon or AT&T. Mobile phone Wi-Fi can be shared to a laptop when you need to do occasional paperwork. Some truckers also have mobile hotspot devices, which gives you more data than a mobile phone plan.

Amazon.com prices as of 10/5/20 10:15 MST. Product prices and availability are accurate as of the date/time indicated and are subject to change. Any price and availability information displayed on Amazon.com at the time of purchase will apply to the purchase of this product. SatelliteInternet.com utilizes paid Amazon links.