Home » How to Keep Snow off Your Satellite Dish

How to Keep Snow off Your Satellite Dish

Fortunately, we rounded up all the best tips for keeping snow and ice off your satellite dish without damaging your equipment and having to pay a bunch of fees for it (spoiler: don’t use PAM or other oil sprays). We cover satellite dish heaters and heat tape, dish covers, and even ways to maintain your satellite dish equipment year-round so you can avoid equipment fees from your provider.

They come in different sizes—some are even specifically designed to fit with different satellite dish brands, like DISH, DIRECTV, HughesNet, Viasat, etc. We’ve rounded up the best options for most people in our table below. 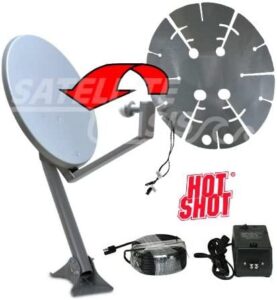 *Prices as of 11/29/22. Prices may fluctuate on Amazon marketplace.

Notice both our recommendations come from HotShot. HotShot creates all kinds of different heating items—indoor and outdoor—and is a respected name in the heating industry (yes, that’s a whole thing), so you’ll be in good hands.

Just remember to measure your satellite dish—or at least know its measurements—before selecting a satellite dish heater so it will for sure fit your equipment. A dish heater that’s too small may not be able to fully clear the snow from your dish, and then you’re back where you started.

Most satellite dish heaters heat themselves up automatically once outdoor temperatures reach freezing or below, so once it’s installed, you don’t have to worry about turning it on or predicting your next snow storm. Just sit back and enjoy your uninterrupted satellite internet or satellite TV service.

Looking for reliable satellite internet? Enter your zip code and we’ll show you the best internet providers in your area.

Each satellite dish heater usually comes with its own specific set of installation instructions, so read the manual before jumping into setup. Just so you know what to expect, we gathered some general, helpful tips for you as well.

When should you install your satellite dish heater?

How do you install the stiff heating implement?

Satellite dish heaters are usually made of thin metal. The heating implement can be stiff and a bit difficult to straighten out as you try to anchor it to the dish (which you do with the tape or screws included in your kit).

If you run into a little trouble, try letting the heater sit out in natural sunlight for a bit before handling. On a hot enough day, the metal will absorb some of the heat and be more pliable. This is another reason to do the installation work in the summer.

Heating tape isn’t actually tape—it’s actually a cable designed to produce heat. Heat tape is typically wrapped around pipes to avoid freezing in the winter. That makes it a pretty decent option for satellite dishes as well. 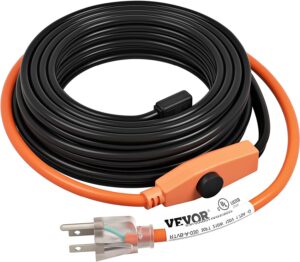 Heating tape is a lot more finicky to apply to a satellite dish than a pipe. You need to find some way to adhere them to the dish, which usually involves using clamps to wrap it around the dish’s circumference. Plus, you have to manually turn the heat on and off. Overall, heat tape gets the job done cheaply, but it’s less convenient than a one-and-done satellite dish heater.

We’ve highlighted our favorite option above if the price is more in your wheelhouse, but if you can manage it, a dish heater will better serve you in the long-run.

Dish covers are hardy, weather-proofed fabric bags you place over your satellite dish to help avoid ice build-up. They also tend to help snow slide off instead of piling up in the dish itself, but “tend to” are the key words there because snow can still easily build up on a dish cover, especially if you live somewhere with heavy snowfall (hello, Alaska!).

Unfortunately, dish covers can also interfere with your internet or TV signal—just like anything that gets between your satellite dish and the sky. For that reason, we don’t recommend them. If you’re looking to keep snow off your dish, a satellite dish heater or even heat tape are better buys.

How do I clean my satellite dish?

These should all help you generally maintain your satellite dish and avoid equipment damage or technician fees. Just remember to be careful while conducting satellite dish cleaning. You never want to risk your back or bones by falling off a roof, just to get your internet signal back.

How do I protect my satellite dish from branches and leaves?

The best way to keep your satellite dish clean is prevention. If you have trees overhanging your house and roof area (where you’re most likely to have your satellite internet or TV dish), you may want to consider trimming it back significantly or removing the tree completely.

Trees that are close enough to your house to have branches fall directly onto your satellite dish are also a danger to your roof and home, so you can use the opportunity to do some overall home safety inspection.

If that isn’t enough, try following our above steps for cleaning your satellite dish.

Starlink is its own special beast in the satellite internet world (for now, at least—Amazon’s Project Kuiper is on its way). Its equipment is pretty state-of-the-art. Part of that is its low-earth orbit (LEO) satellites that send and receive signals, and part of it is your personal Starlink dish.

If you’re interested, here’s some information on Starlink Internet and its satellite dish conveniences. See if the service might be for you.

Does the Starlink dish have a heater?

How hot does the Starlink dish get?

Starlink satellite dishes can operate from -22 degrees to 122 degrees Fahrenheit. If it reaches 122, it goes into thermal shutdown. This shouldn’t affect most people, but those living in deserts will want to install a shade and possibly request a new satellite dish, as Starlink’s new Dishy is designed to use less power, and therefore, generate less heat to begin with.

Starlink’s satellite dish has a heating function that automatically detects snow and ice buildup and heats up to melt the snow. This feature is enough to attract animals (resulting in the famous Starlink cats) but isn’t hot enough to be a danger to them or your electricity bill.

The Starlink dish also has a Pre-Heat feature where you can choose to heat up your satellite dish ahead of an incoming storm.

Does the Starlink dish melt snow?

Starlink’s Dishy has an automatic heating function that allows it to detect and then melt snow and ice. If you live in an area with heavy snowfall, you may still have to go out and manually clear your dish.

Starlink’s satellite dish can only melt snow so fast, so if several feet settle in a short amount of time, you’ll want to brush off the majority of it gently with a brush to retain your Starlink internet connection.

Can I spray WD-40 on my satellite dish?

Avoid using WD-40 on any kind of satellite dish, especially those from satellite internet and satellite TV providers. These dishes come with special chemical coatings to make sure they’re weatherproof, and WD-40 can interfere with or even destroy these coatings, resulting in high replacement costs.

Is it OK to spray PAM on a satellite dish?

We’d highly advise against using Pam or other cooking oils on satellite dishes. The oil might temporarily help snow slide off, but it can also damage the weatherproofing that protects your satellite dish. If you’re worried about snow, we recommend trying a satellite dish heater instead.

Can I spray silicone on my satellite dish?

No, you don’t want to use silicone sprays on your satellite dish—just like you should avoid using WD-40 and cooking sprays. They may help snow slide off, but they can also compromise the weatherproofing measures meant to protect your satellite dish from the elements. Instead, try a satellite dish heater or heat tape to get rid of snow.

What can I put on my satellite dish to keep the snow from sticking?

A satellite dish heater is the most reliable and convenient way to keep snow from sticking to your dish. You could also consider heat tape.

Can I put a plastic bag over my satellite dish?

You can put a plastic bag over your satellite dish, but it may interfere with your signal. It basically causes the same issues as a snow dish cover, except plastic bags are weaker and more liable to tear. Satellite dish heaters are a better alternative.

How do you keep snow and ice from sticking on a satellite dish?

Heat is the most reliable way to avoid snow and ice buildup on satellite dishes in the winter. Starlink adds a built-in heat setting to its dishes automatically, but for HughesNet, Viasat, DIRECTV, or DISH satellite dishes, you’ll need a satellite dish heater to get the same effect.

Satellite dish heaters cost around $100–$200, but they’re safer than knocking the snow off yourself. Plus, they’re easy to install, and because they automatically heat up to protect your dish in cold weather, you’ll never have to worry about snow interference again.

Written by
Mikayla Rivera
Mikayla Rivera has worked as an editor for nine years on websites like Reviews.org, HowtoWatch.com, and CableTV.com. As someone who grew up with little to no internet access, she knows how vital it is for education, work, and even play. She’s now determined to help readers get reliable internet speeds, wherever they live. Her passion for internet accessibility, memes, and ethical marketing is rivaled only by her dedication to The Chicago Manual of Style. When Mikayla isn’t managing SatelliteInternet.com, she’s writing novels of her own.
Read More