Home » What Are the New Satellite Internet Providers?

What Are the New Satellite Internet Providers?

From Sputnik to SpaceX, satellites have come a long way. Fortunately, you don’t have to worry about keeping up with all the changes. We’re here to update you on any satellite internet news and plans for the future. We also don’t want to forget what got us here, so we’ve included interesting tidbits about the history of satellite internet as well. 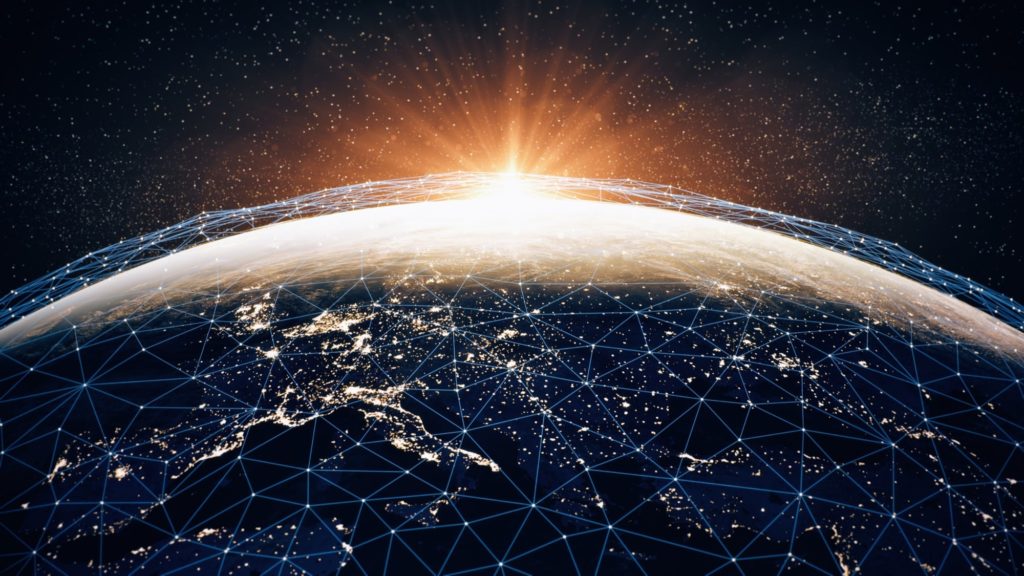 The next era of satellite internet will be the result of a race to deliver affordable high-speed, low-latency internet to underserved regions of the world. Several well-funded organizations have already begun launching satellites and more have launches scheduled soon. Despite the competition featuring a diverse field of space racers, they’re all focused on variations of the same solution, orbiting networks. Let’s take a closer look at those networks and the companies building them.

How cool is that?

One LEO satellite can’t cover as much area as a geostationary satellite, so companies launch more of them to create clusters, called satellite constellations. Satellites within a constellation can communicate with one another to create what amounts to an orbiting network.

This is the second time around that this approach has gained popularity. In the 1990s, attempts to build satellite constellations partially bankrupted Globalstar and Iridium Communications, and cost Teledesic, partially funded by Microsoft, over $9 billion before it shut down the project in 2002.

So why are companies back at it today? Entry costs have fallen and the competition is hot.

Who’s in the race?

Figuring out which companies do what in the new space race gets murky. Some companies want to provide internet service, some build satellites, some launch satellites, and some do a mix of all of that. Plus, several of them worked together in various combinations. Here’s a breakdown of who’s doing what to get ahead in the race.

Elon Musk’s rocket company, SpaceX, has two major projects in the works: Starlink and Starship. Starlink is its satellite constellation program. Starship is a project aimed at going to Mars.

In February 2018, SpaceX successfully launched two satellites into LEO. All together, SpaceX had 21 successful launches in 2018 and intends to beat that in 2019.

After the first successful launch, the Federal Communications Commission (FCC) approved Starlink’s formal request to offer broadband service. But that service is still a ways off because it will take a while to get enough satellites in place for a viable network. Starlink’s ultimate goal is to launch 4,425 satellites by 2024, but it will likely start offering service before then.

In other SpaceX news, the company also plans to launch satellites for other companies too, including 75 for competitors Iridium.

Project Kuiper is Amazon's LEO satellite internet company. The service isn't yet available but plans to be available within the next six years, after it's crafted a full satellite constellation that it clearly hopes to rival Starlink. Amazon says its mission is to getting rural areas connected with internet access. We're pretty sure it's actually to make money, but if the service delivers on everything it promises, it could still be a good option for users.

In a partnered effort with The Boeing Company, Iridium Communication Inc. finished its nine-year, $3 billion satellite constellation improvements in February 2019 as part of its Iridium NEXT program.

Iridium partnered with SpaceX to literally get the project off the ground. It contracted SpaceX for eight flights to deliver 75 satellites into LEO.

Iridium now offers Certus, a satellite communications service for businesses and government enterprises, particularly on the ocean. It plans to add services for aviation by the end of 2019.

Jeff Bezos’s rocket company, Blue Origin, isn’t building a satellite network, but it is building reusable spacecraft to launch satellites for a variety of companies. Telesat, the largest satellite internet provider in Canada, is one such company.

Telesat will also lean on Loon to construct its network operating system.

OneWeb is a joint effort to bring internet access to the world. Some of its partners are Virgin, Qualcomm, Airbus, and Hughes (as in HughesNet). OneWeb manufactures its own satellites and plans to launch 900 LEO satellites by the end of 2019. The international aerospace company, Arianespace, will launch the first OneWeb satellites in 2019. Virgin Orbit and Blue Origin will also launch OneWeb Satellites later in the year.

Facebook’s former internet service plan, Aquila, involved mounting communications transmitters on solar-powered drones to provide internet access. In the summer of 2018, Facebook revealed it was working on an internet satellite called Athena and refocusing its Aquila project on developing software.

The Athena satellite is expected to launch in 2019, but Facebook hasn't released further details to the public yet.

Loon, started by Google and now run by parent company Alphabet, is slightly different from the other companies listed here. It’s not building a satellite constellation, but it is using similar concepts. Instead of an orbiting network in space, Loon uses weather balloons to float transmitters high in the atmosphere, essentially creating a floating network in the sky.

Despite many of these efforts being collaborative, the billionaires leading the charge would no doubt like some bragging rights. But picking a front-runner depends on how you define winning.

Iridium is clearly in the lead in the business internet sector. OneWeb has the shortest timeline but has yet to launch a satellite. And SpaceX has the most ambitious plan, so it might build the coolest network even if it isn’t the first one to finish.

But who are the real winners in the new space race? People. The millions of lives that will benefit from accessing high-speed internet are the biggest perk to launching more satellites.

A Brief History of Satellite Internet

1957—The Soviet Union launches Sputnik 1 and kicks off the space race.

1958—The US launches its first satellite, Explorer 1.

1962—The Communications Satellite Act of 1962 gives the FCC regulatory power over communications satellites. The act aims to spur competition among companies looking to use satellites for commerce and also encourage global cooperation in organizing satellite networks.

1984—PanAmSat is founded to compete with INTELSAT.

1993—Hughes Aircraft Co. applies for an FCC license to launch Spaceway, the first satellite designed to use the Ka-band frequencies on the electromagnetic spectrum. These frequencies allow for greater transmission bandwidth, making satellite a reasonable means for transmitting internet signals.

2006—After being sold to SkyTerra, Hughes Network Systems is divested and becomes its own company: HughesNet.

2012—EchoStar launches Jupiter 1, putting it in a mini space race with Viasat.

2017—Viasat launches Viasat 2, which delivers the fastest residential satellite internet in the US to date.