Do you know how much money your state is getting from the RDOF (Rural Digital Opportunity Fund)? There’s been controversy, celebration, and some cynicism since the FCC announced the “winning” internet providers who will get a share of the funding.1,2,3 But is any of this criticism warranted? And what do the numbers show? (Skip to map.)

What is the RDOF?

The Rural Digital Opportunity Fund (RDOF) is an FCC initiative designed to invest 20.4 billion dollars in grant money into developing rural broadband networks. The grant will be allocated to internet providers over the next 10 years to help fix the digital divide in rural America.14 The first phase will grant $9.2 billion, with the final phase getting the rest. The funding will be sent to telcos and other companies operating in 49 states and the Commonwealth of the Northern Mariana Islands.

The RDOF is split into two phases; phase 1 auction results were announced in December 2020.16 Phase 1 focuses on areas with no internet access. The FCC defines “no internet access” as census blocks that are "entirely unserved by voice and with broadband speeds of at least 25/3 Mbps."17  Phase 2 will focus on underserved areas and rely on updated FCC data that will more accurately depict which areas have coverage.18 The timeframe for phase 2 has not been announced yet.

Are all states included in the RDOF program?

Alaska is the only state that isn't included in the RDOF program. Instead, the FCC has a separate $1.5 billion broadband funding program dedicated to Alaska.15

Here's exactly where the RDOF’s $9.2 billion for broadband expansion is going—and how that counts per resident.

SatelliteInternet.com crunched the data to find out how much RDOF money each state will get to expand internet access to rural Americans, breaking it down to dollars per resident. Then we looked at whether the states in the most need are actually getting the most help.

Spoiler alert: it looks like some states got a fair amount, others are getting shortchanged, and a few scored more than seems fair (looking at you, California). 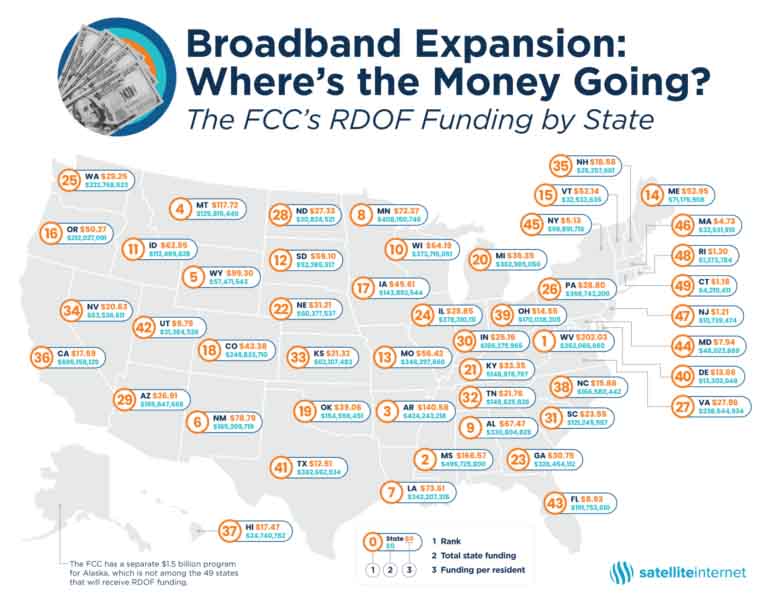 The map above shows the funding per person in each state. But many of those folks live in cities and urban areas. So it's also helpful to look at the FCC’s funding auction by how much money is allocated per rural resident, on a state by state basis. This paints a different picture than looking at per resident data alone.

For example, the state awarded the most funding is California, which is a big state with a large population. Yet only 837,284 of California’s 39 million residents live in rural areas.4 So when the RDOF grant is spread out among all the rural population, it amounts to a walloping $830 per resident. But in states like New Hampshire, North Dakota, and Connecticut, funding amounts to less than $60 per rural resident.

Review the funding per rural resident for all states in our interactive data chart.

States awarded the most funding per rural resident:

Looking at the state-by-state numbers doesn’t tell the whole story. Let’s take a look at how that funding divides out per capita.

For example, Maryland ranks as one of the states with the least allocated funding per resident. Maryland’s rural residents have suffered the consequences of faulty FCC data allocation for years. Racial inequity among neighborhoods compounds the crisis: African American households account for 40% of all disconnected households.6

And South Dakota has some of the slowest average internet speeds and a large rural population, yet it ranks as one of the states with the least allocated funding support overall.7,4

Kentucky is one of the poorest states in the US with some of the most internet deserts.5,7 In rural Appalachia, rugged terrain creates additional obstacles to installing broadband infrastructure. And in some areas, internet access is getting worse—last autumn, AT&T discontinued its DSL internet service to new customers in parts of rural Kentucky. Yet residents in big cities like Louisville have access to 1 Gbps fiber internet.8

In case you’re getting fired up about some state-by-state inequality here, remember that this data doesn’t give the whole picture because this is only Phase 1 of the FCC’s RDOF program. Phase 1 focuses on homes and businesses located in census blocks without any broadband connection (which is defined by the FCC as at least 25 Mbps download and 3 Mbps upload).

So, the funding in this round is skewed to those who have the absolute worst broadband service in the country. Companies that won funding have up to six years to extend service to areas they won the bid for. The next phase will likely include a similar timeframe but more allocated money.

Rural America’s digital divide: How did we get here?

While people living in urban areas can usually get fast and reasonably priced internet service, people in small towns and rural areas typically have slow internet access at high prices. There are some good rural internet solutions, but they’re not available to everyone. Most rural internet options restrict data, making many typical internet activities like Zoom conferencing or online schooling difficult or impossible. And some areas have no internet access at all. This has created a massive digital divide in America between the haves (those living in urban and suburban areas) and the have nots (those living in rural America).

Internet service providers have invested heavily in infrastructure in urban areas—where the cost per customer is less—but have skipped over most of rural America, creating a stark difference in internet options. The lack of affordable broadband internet in rural areas has been consistently linked to lower outcomes in education, income, and access to healthcare.9,10,11

The digital divide in rural America is exacerbated by the high price of bringing fiber and cable lines out to rural areas. The United States Department of Transportation tracked the expense of installing fiber-optic cable in 17 states and found that the cost ranges from $6,600 per mile to $267,000 per mile.12 The FCC estimated that the total cost of installing fiber-optic internet to every rural American would cost $80 billion.13

Does the RDOF provide enough funding?

The FCC estimated that the total cost of installing fiber-optic internet to every rural American would cost $80 billion.13 Although the RDOF is a step in the right direction (phase 1 and 2 total $20 billion), it won’t fix everything. It’s a full $60 billion short of how much is actually needed. The next logical question is how fairly the funds are allocated and whether the people who need the most help are actually getting help.

There were 180 winning bidders in the funding auction who will receive a share of the RDOF grant. Over 99% of all auction winners committed to service at speeds of at least 100/20 Mbps, with 85% committing to gigabit broadband.19 The top ten include fiber internet providers LTD Broadband, Windstream, and Frontier, as well as mostly DSL and cable companies like CenturyLink and Charter.

SpaceX (Starlink) was the only satellite company in the top 10 with its low-earth orbit satellite internet service, although Hughes Networks won over a million in funding for deploying internet service in Rhode Island. Cable company Charter won support for the most locations (over 1 million) while (WISP) wireless internet service providers were awarded the most funding at $1.3 billion.16 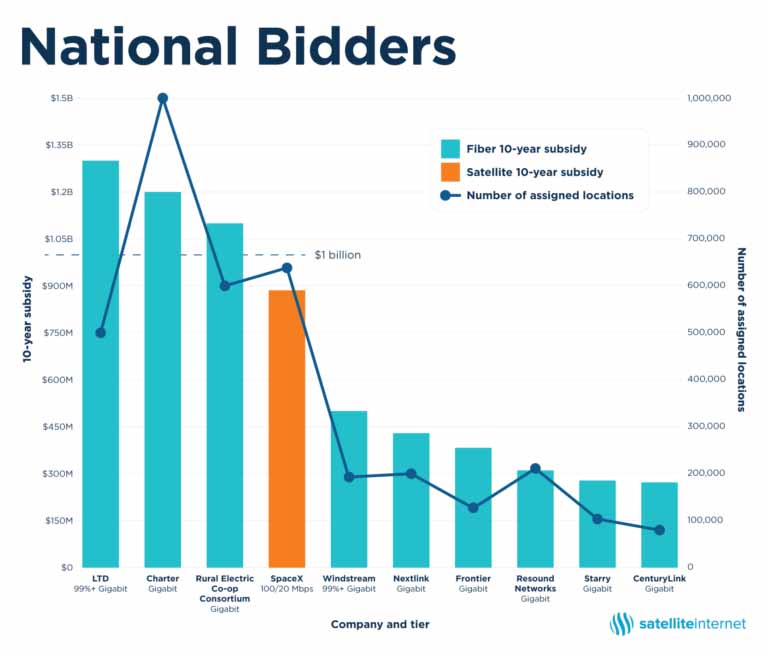 Looking ahead: Phase 2 and more

Phase 2 of the FCC’s RDOF will focus on improving service to underserved premises—homes and businesses that have slow or expensive internet or in census blocks that are partially served.

But before the auction for phase 2 funding begins, the FCC’s new Data Task Force will be redoing data collecting on broadband internet access across the country so that a more granular and accurate picture of internet availability will be available.20 Currently, widespread data inaccuracies in the FCC’s maps have led to major coverage gaps, skipping over many areas in need.21,22

As we wait for phase 2 of the RDOF, the Biden administration is working on other ways to end the digital divide. The Accessible, Affordable Internet for All Act would grant $94 billion into broadband funding for the US, including $80 billion for building broadband infrastructure.23,24 And on an individual level, this fund includes broadband subsidies of up to $50 per month for qualified low-income households (up to $75 for individuals living on Tribal Lands).25 You can find out if you qualify for this funding (which is administered through the Lifeline program) by checking out the Lifeline website.

In an effort to avoid data misallocation and ensure accuracy for future funding and reporting, the FCC has begun a user-focused initiative within their broadband data collection program. Accepting data via an online form, the FCC invites consumers to share their broadband experience in three to five sentences. You can submit your internet experience here.

Is your town getting faster internet?

You can check out the census blocks that scored phase 1 funding in the FCC map of the RDOF results.

Although the digital divide in the US is rampant, there are many government programs in place that could end the digital divide within the foreseeable future. We herald each effort that brings affordable, high-speed internet to rural areas. Although the FCC’s RDOF auction has its problems, it has a lot of advantages too. Through this program, five million households will be connected to broadband internet. And that’s something we can all celebrate.

Funding data was sourced from the FCC Rural Digital Opportunity Fund Phase I Auction Results.26 To get an idea of what those numbers look like on a per capita basis, we ranked each state by how much funding they are allocated per resident (taking total state funding and dividing by state population from US Census data).27

Looking deeper, we also determined how much funding per rural resident was awarded to each state by looking at funding amounts and rural population estimates. With these states, we took the total state funding and divided by the estimated rural population data from USDA Economic Research Service, US Census data, and Rural Health Information Hub.28,29